How to store up electric energy for future use


To what extent are Russian manufacturers and consumers of energy storage units involved in the global trend for energy storage? Who determines the demand for the products of domestic suppliers? What are the criteria that Russian energy storage devices must meet to ensure market growth rates in the coming years comparable with those of world leaders in the production and use of these technologies?


These and other issues were discussed at the panel discussion “Energy Storage – Another Attempt?” held at the ARWE-2019 conference in Ulyanovsk.

Not all markets are equal

“The Russian energy storage market has not yet been formed,” Emin Askerov, the moderator of the discussion and Senior Adviser at Roland Berger Gmbh, said, “There are small deals, there are examples of the use of energy storage units in power systems, but so far at the level of small projects.”

According to him, this market is developing most actively in China, Japan, South Korea, Europe and the United States, and in a variety of areas: traditional and renewable energy, transport, and logistics. The leading countries in terms of production of energy storage devices continue to increase their dynamics. According to experts, the demand for energy storage units in the next decade will reduce the cost of lithium-ion batteries alone by more than half. In a growing market, every energy storage device manufacturer can find a niche for its technology.

Suppliers of energy storage devices are optimistic about the Russian potential: in contrast to renewable energy sources, this segment is already developing today without government support and, despite the high cost of projects, it is commercially in demand in both the electric power sector and in production industry. Various energy storage technologies are used in isolated energy systems, in generating capacities for regulating modes, in grid facilities, in enterprises as power compensators, to provide energy for electric vehicles, drones, and in many other areas.

“Any converting equipment that is part of energy storage devices can successfully play the role of a static power compensator,” Yury Kramskoy, Regional Director of Shenzhen Hopewind Electric Co., Ltd. for Russia and the EEU countries, states, “In this case, we can get an additional effect from the introduction of energy storage devices at the grid points where the use of static compensators was planned. Or the use of energy storage units with charging stations for electric vehicles, since in megacities the creation of charging networks requires a large supply of power. Energy storage units can become a buffer for connection to the grid. They can be charged at a cheaper night rate and work with a minimum load on the grid, thereby optimizing its functioning.”

The company, which produces a full range of power converting electronics, has already installed several hundred megawatts of energy storage stations around the world. The largest installation on the basis of the manufactured equipment is a storage system for providing system services with a power of 40 MW and a capacity of 160 MW-h in China.

“This is a serious industrial facility that can be used as a power plant, as an energy storage unit to control frequency, reactive power and power characteristics of the grid. Such facilities are being constructed en masse now, and not only in China,” the speaker assured.

The benefits of capacitors

“We are interesting to consumers for whom the specific stored energy is not as important as the starting power,” Arseny Zamyatin, Deputy General Director of TEEMP LLC explains. In contrast to batteries, supercapacitors are capable of quickly absorbing energy, and releasing it just as quickly. Thus they provide a stable operation – up to 1 million cycles – in contrast to the 3–4 thousand of lithium-ion batteries, and can operate at extreme temperatures down to –60 degrees, which is particularly important for equipment being used in Arctic conditions. The key feature of these technologies is the reduced resistance and reduced degradation of chemical elements.”

In 2017, the company launched production of supercapacitor cells and modules based on them in Khimki, Moscow Region. Today, supercapacitor modules by TEEMP are successfully tested on railways, in aviation, in automotive industry, and in the energy sector.

“For three years now, the company has been providing Russian Railways with starting systems for diesel locomotives,” says Arseny Zamyatin, “In Russia there are about 900 diesel locomotives with our systems, which ensure not only a guaranteed start-up, but also 10-percent fuel savings. In the energy industry, together with Mosgaz and Mosenergo, we are working on guaranteed start-up systems for diesel generators and uninterruptible power supply systems with high-precision delay. Now the company is preparing two pilot projects for the oil industry related to UPS systems and emergency start-ups of auxiliary systems. The most promising industry for the company is special use at defense industry enterprises and the Ministry of Defense.”

System energy storage units (SES) by Electronmash JSC have a wide range of capabilities to instantly eliminate imbalances in power systems of various levels, where active and reactive power is generated and active power is consumed.

Therefore, Andrey Litvinenko, the Executive Director of the company, considers SES, first and foremost, as a multifunctional service. For large power systems with a capacity of up to 500 MW, a SES will help ensure a shift in the daily maximum load and reserves the highly maneuverable peak capacity. For mains systems of up to 100 MW, it can eliminate overloading and solve the problem of throughput capacity without the expensive construction of new power lines. For renewable energy sources connected to the grid, it can smooth out the unevenness of energy generation.

“Industrial enterprises, where a large number of motors are usually used, have a great need for network energy storage units,” Andrey Litvinenko explains, “SES makes it possible to ensure proper quality of electric power in terms of frequency and voltage in the local network at the time of starting the motors, to compensate for the reactive load. The advantage of an industrial client is that, unlike network companies, they have the right to independently regulate and optimize the modes of their power generating facilities, including the use of energy storage devices. We have created digital models of some facilities to be controlled and, through modeling, we select and help the client choose the correct parameters for SES’s and calculate their payback period."

According to the executive director, the implementation of the SES can be accelerated if we standardize the system services and introduce the concept of an SES subject operator, as well as developing a common algorithm that is understandable in terms of payback periods and return on investment. Such a structure of return on investment exists in the UK – a country that is a leader in the implementation of SES.

Is there demand in the power generating industry?

For power companies, the issue of using storage devices is also related to their payback period.

“As consumers, we evaluate the use of storage in three scenarios,” Grigory Nazarov, General Director of Atom Energopromsbyt JSC, says, “Firstly, this is an increase in the quality and reliability of the electric power supply, which has already been discussed. Secondly, can we reduce the cost of purchased electricity and of technical connection due to the use of our in-house power sources? Thirdly, can we earn extra money as a prosumer using a system of electric energy accumulation and storage? The cost of energy storage systems in Russia is about $700–800 per kilowatt-hour so far, but for us, given the current price per kilowatt of purchased power and the construction of power transmission lines, energy storage devices are interesting at a cost of $500 (or, better yet, $300) per kilowatt-hour.”

According to Yegor Kozhurov, Acting Deputy Director and Chief Engineer of the Ulyanovsk distribution networks (IDGC of Volga branch), the company’s investment plans, providing for the reconstruction of compensators and replacement of batteries, is considering the purchase of powerful energy storage units to address the company’s problems or to compensate reactive power.

Valery Dzyubenko, Deputy Director of the Association of Energy Consumers, believes that it is the multipurpose nature of the energy storage units that makes it easier to obtain a return on investment for projects related to energy storage systems. These purposes are determined by the specifics of power systems in different countries, industries and even the specifics of power consumption at individual enterprises. In this case, the calculation of the return on investment should be considered on a case by case basis.

“Consumers with highly sensitive receivers have demand for a high-quality power supply,” he says, “Microelectronic companies in the Moscow Region, for example, have installed a system of energy storage units with flywheels that help stabilize the quality of the power supply. At energy-intensive metallurgical companies, the payback model is formed in a different way due to a decrease in payments for capacity and volumes of power consumption. As a result, the effects of purchasing electricity in the wholesale market for electricity and power and purchasing grid capacity are superimposed.”

But the use of energy storage units has advantages not only for consumers, but also for the power system in general. It is becoming more flexible and cost-effective, and there is a kind of common benefit that helps save money on energy. At the same time, the most attractive scenario for the development of storage systems is being formed in Russia. We see that the peak load is 1.6 times lower than the installed capacity of all generation facilities which we are paying for.

Considering a significant share in the total volume of electricity consumption (about half, while in other countries it is no more than one third), industrial consumers have the greatest potential for the use of energy storage systems. 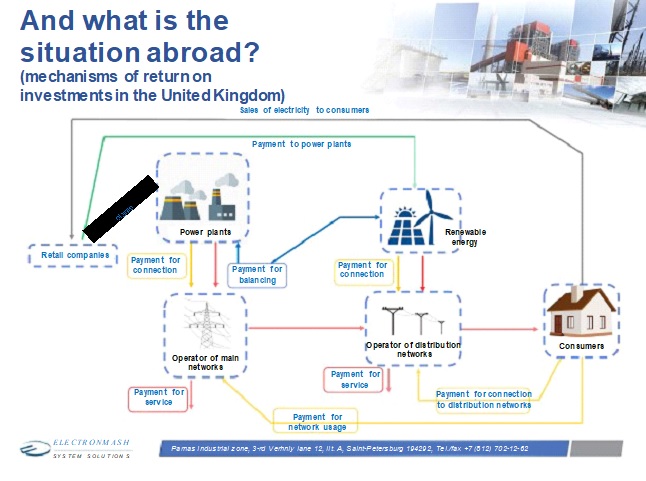